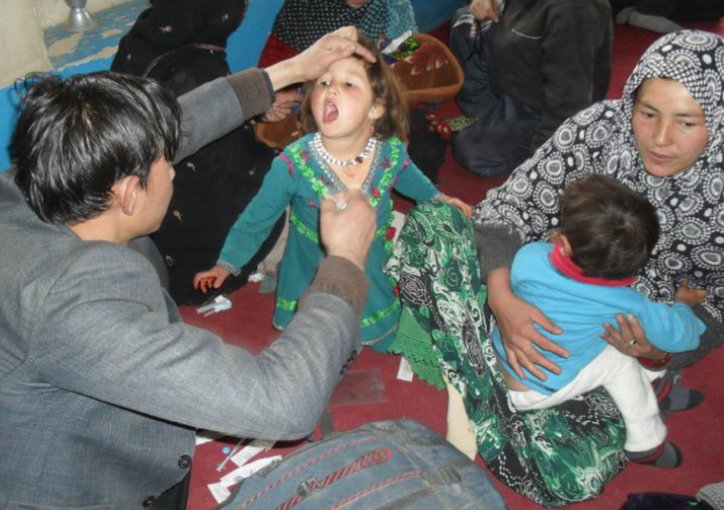 Afghanistan is one of the last three countries in the world where poliomyelitis is still endemic [1]. 14 polio cases were reported in 2017, and by the end of April 2018 there were 7 new cases reported in the country [2]. Polio mainly affects children under 5 years of age and one in 200 infections leads to irreversible paralysis.

In March, the Afghanistan polio eradication initiative conducted its first national immunization campaign for eradication of the disease in 2018. In just a week, around 70,000 workers knocked on doors and stopped families in health centers, city streets and border crossings to vaccinate almost ten million children [3]. Monitoring data reflected more than 94% coverage in each vaccination campaign during 2017. The number of children missed due to inaccessibility went down since 2017 but an estimated 138 000 children were still missing in the national vaccination campaign of March 2018.

Without a clinic, a region like Nawur would have remained unknown to the health authorities; at its opening, the ministry of public health informed organizations such as UNICEF which registered the clinic as a vaccination center. The ministry and its partners have long been trying to reach isolated areas with vaccination campaigns and the health clinic gives them a base for this in the region. Before the establishment of Sar Assya clinic in the district of Nawur in 2011 [4], various illnesses remained untreated, the mortality rate among mothers and children was high, and children did not receive the requisite vaccinations. The Nawur clinic’s services have brought about significant improvements in the health situation of the population.

Since it registration in the national health care system, the Nawur clinic’s staff vaccinated thousands of children not only for polio, but other infectious diseases such as tuberculosis, diphtheria, tetanus, pertussis, etc. In 2017, 1,022 children and several hundreds of women were vaccinated in Nawur. During the March 2018 vaccination campaign, 142 young children received the polio vaccine.

Through its implementation in a remote region of central Afghanistan Nawur health center contributes to the reduction of mortality and serves as a base for vaccination and other prevention campaigns.

[2] Note: No cases have been reported since 2016 in the central region of Afghanistan where Nai Qala operates.

Before: she graduated from Nai Qala School and benefited from a tutoring course to prepare for Kankor.
Now : she is studying midwifery in the university

Zainab about Nai Qala school: “We were able to study in good conditions, without the wind making our notebooks fly, without the scorching heat of the sun that made us sweat or without the cold that prevented us from holding our pens ... Thanks to the building we felt comfortable and could participate in the classes and exams without any disturbance.” ... Voir plusVoir moins

Early childhood development is key to success later in life. RT if you agree #EducationCannotWait for young learners.