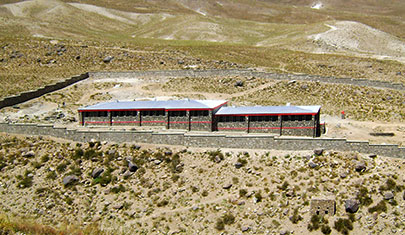 Our Association successfully carried out a second school construction project in the village of Sada, one of the hamlets of Qara Bagh district, in the Ghazni Province. The school was finalized in September 2009.

We built an entirely new school in the village of Sada. This project has significantly raised the motivation and self-respect of the children, as well as that of their teachers, bringing a positive impact to their lives, families and communities.

The construction of the new school has provided improved conditions of study for approximately 1’000 students, boys and girls. This is a higher number than initially expected which underlines the determination of families in the region to see their children receiving an education. Previously, children would be sent to work on the family plots of land, now they attend classes! The number of students is expected to rise further in view of the motivation generated by the building of the school.

There was a very big need to provide children of Sada and the surrounding hamlets with a decent and proper environment in which they can complete their primary, secondary and high-school education.

For the first time, in early 2011, 17 girls and 20 boys completed their high-school in Sada and are now going to university in Kabul.

The financial project requirements included costs for building materials, equipment, transport and salaries for the daily workers, as well as covering administrative costs for the project team. The Sada community formally made a piece of land available for the school and provided labor and general support. It is in charge of the maintenance of the school.

This project aims to be another model for the future development and a source of hope for the region. It was discussed and is consistent with the objectives and plans of the department of Education of the Province of Ghazni and of the Ministry of Education in Kabul.